1920 Ocoee and Beyond: Paths to Truth and Reconciliation: Home

This guide was created in support of the Peace and Justice Institute's facilitation of a series of community conversations and Central Florida's racial history. 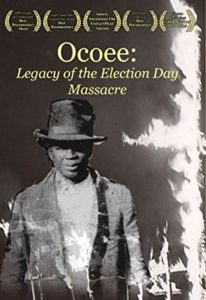 In the early 20th century, Ocoee was home to one of Florida's most prosperous African American communities. On Election Day 1920, Mose Norman and July Perry attempted to vote and the African American community was erased from Ocoee's history, until now. Through the voice of the grandson of the man that led the lynch mob, and the great-grandson of the man that was lynched, OCOEE: LEGACY OF THE ELECTION DAY MASSACRE exposes the events that ensued when two black men exercised their right to vote. Now, Ocoee must confront its past in an effort of reconciliation and healing.

The Florida Humanities Council has awarded a $5,000 grant to the Peace and Justice Institute through the Valencia College Foundation to facilitate a series of honest and robust community conversations about Central Florida’s racial history. The project stems from the Equal Justice Initiative Orange County Task Force, a group of community partners including the Democracy Forum, the Bridge-the-Gap Coalition, Hannibal Square Heritage Center, the Peace and Justice Institute and the Human Relations Diversity Board in Ocoee. This task force is partnering with the Equal Justice Initiative's project to create a national memorial for Peace and Justice.

Storyline of the Ocoee Massacre 1920

The Legacy of Ocoee Phase III

The Peace and Justice Institute at Valencia College promotes peace and justice for all. Our aim is to nurture an inclusive, caring and respectful environment on campus and within our community - one where conflict leads to growth and transformation rather than violence or aggression.

The Initiative is guided by its mission: All People, All Voices, All Matter: Making a difference by intentionally engaging in practices and principles that explore, advocate, and honor the dignity of self, others, and the earth.

Principles: How We Treat Each Other

The Equal Justice Initiative is committed to ending mass incarceration and excessive punishment in the United States, to challenging racial and economic injustice, and to protecting basic human rights for the most vulnerable people in American society.