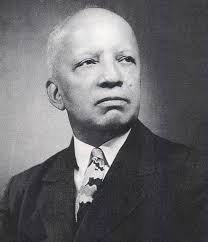 The story of Black History Month begins in Chicago during the summer of 1915. An alumnus of the University of Chicago with many friends in the city, Carter G. Woodson traveled from Washington, D.C. to participate in a national celebration of the fiftieth anniversary of emancipation sponsored by the state of Illinois. Thousands of African Americans travelled from across the country to see exhibits highlighting the progress their people had made since the destruction of slavery. Awarded a doctorate in Harvard three years earlier, Woodson joined the other exhibitors with a black history display. Despite being held at the Coliseum, the site of the 1912 Republican convention, an overflow crowd of six to twelve thousand waited outside for their turn to view the exhibits. Inspired by the three-week celebration, Woodson decided to form an organization to promote the scientific study of black life and history before leaving town. On September 9th, Woodson met at the Wabash YMCA with A. L. Jackson and three others and formed the Association for the Study of Negro Life and History (ASNLH).

As early as 1920, Woodson urged black civic organizations to promote the achievements that researchers were uncovering. A graduate member of Omega Psi Phi, he urged his fraternity brothers to take up the work. In 1924, they responded with the creation of Negro History and Literature Week, which they renamed Negro Achievement Week. Their outreach was significant, but Woodson desired greater impact. As he told an audience of Hampton Institute students, “We are going back to that beautiful history and it is going to inspire us to greater achievements.” In 1925, he decided that the Association had to shoulder the responsibility. Going forward it would both create and popularize knowledge about the black past. He sent out a press release announcing Negro History Week in February, 1926.

Woodson chose February for reasons of tradition and reform. It is commonly said that Woodson selected February to encompass the birthdays of two great Americans who played a prominent role in shaping black history, namely Abraham Lincoln and Frederick Douglass, whose birthdays are the 12th and the 14th, respectively. More importantly, he chose them for reasons of tradition. Since Lincoln’s assassination in 1865, the black community, along with other Republicans, had been celebrating the fallen President’s birthday. And since the late 1890s, black communities across the country had been celebrating Douglass’. Well aware of the pre-existing celebrations, Woodson built Negro History Week around traditional days of commemorating the black past. He was asking the public to extend their study of black history, not to create a new tradition. In doing so, he increased his chances for success.

Reference:  ASALH: Association for the Study of African American Life and History, Est. 1915

More About the Man and Black History Month