Civil Rights Movement: Your Rights, My Rights, Our Rights!

What it was and How it Began? 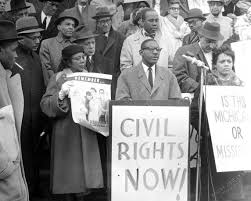 The civil rights movement of the 1950s and 1960s encompassed the fight against racial segregation in the United States, demands for full voting rights for African Americans, and the drive to end legal discrimination based on race.

The origins of the civil rights movement may be traced to the founding of the National Association for the Advancement of Colored People (NAACP) in 1909. The members of the NAACP, including W.E.B. Du Bois, envisioned African Americans taking a full and equal place in U.S. society. This was a radical position at a time when Jim Crow laws had established legal segregation in the South. Even in the North, black people were widely treated as inferior to white people.

The NAACP led legal challenges to segregation laws until, in the landmark 1954 case Brown v. Board of Education, the U.S. Supreme Court struck down the doctrine of separate but equal in the field of public education. The NAACP continued its fight in the courts and soon won a series of decisions that outlawed segregation in other areas of American life, from public parks to prisons. Those legal victories provided the foundation for the modern civil rights movement. This movement campaigned to put the courts' decisions into practice despite resistance from the white power structure in the South.

The first desegregation effort to capture national attention grew out of an incident in Montgomery, Alabama in 1955, when an African American woman named Rosa Parks refused to give up her seat on a bus to a white man. When she was arrested, the African American community in Montgomery launched a boycott of the city bus system. Led by a young, African American minister named Martin Luther King Jr., the protest eventually succeeded in the integration of the city's buses.

Civil rights activists of the early 1960s experimented with a variety of nonviolent tactics, from acts of individual defiance to mass marches and demonstrations. One of the most effective protest methods was called the sit-in. It was first put into practice in 1960 by four African American college students who refused to move from a segregated lunch counter in Greensboro, North Carolina. In 1961, members of the Congress of Racial Equality carried out another peaceful protest. Called the Freedom Riders, the group set out in two buses to integrate bus stations from Washington, D.C., to New Orleans.

The following year, during the Freedom Summer of 1964, large numbers of courageous young people from virtually all the major civil rights organizations traveled to Mississippi to help African Americans register to vote. The civil rights workers remained determined in the face of threats and actual violence.

Confronting Painful Parts of US History