What was Martin's Dream? 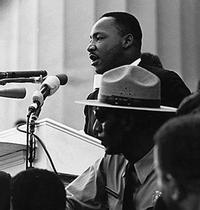 Dr. Martin Luther King Jr.’s “I Have a Dream” speech is one of the most memorable in US history. It was delivered on August 28, 1963, on the steps of the Lincoln Memorial in Washington, DC, where nearly a quarter of a million people had gathered for the March on Washington to urge Congress and President John F. Kennedy to pass a national civil rights bill.

In his speech, King repeated the phrase "I have a dream" eight times: six times to introduce a description of his dream and twice more to simply say, “I have a dream today!” Perhaps the most memorable passage beginning with this phrase was, “I have a dream that my four little children will one day live in a nation where they will not be judged by the color of their skin but by the content of their character.” Another passage began, “I have a dream that one day every valley shall be exalted”—a quote from the book of Isaiah in the Old Testament.

After speaking a few sentences from his prepared conclusion, King picked up on a new theme, reciting the first stanza of “My Country, ’Tis of Thee” and ending with the line, “From every mountainside, let freedom ring.” King spoke forcefully to make himself heard over the growing roar of the crowd. His conclusion powerfully summarized his dream for the United States and his hope for the future: he looked forward to a day “when all of God’s children—black men and white men, Jews and Gentiles, Catholics and Protestants—will be able to join hands and to sing in the words of the old Negro spiritual, ʻFree at last, free at last; thank God almighty, we are free at last.’”

Transcript: I Have a Dream