Who is Stacey Abrams? 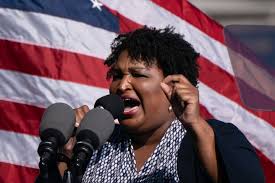 November 3, 2020 proved to be one of the most pivotal presidential elections in our history.  During a time in which our nations experienced divisiveness and brokenness, Several "Red" states flipped "Blue" for the Biden/Harris ticket:  Arizona, Wisconsin, Michigan, Wisconsin, Pennsylvania, and Georgia.  It was a senate runoff election between incumbent Republican Senators, Kelly Loeffler and David Perdue lost to Democratic challengers and newcomers.   Raphael Warnock, a Black clergyman and Jon Ossoff, a young Jewish man, respectively unseated Loeffler and Perdue.

How did this happen?  Stacey Abrams is how!  After her own loss in the 2018 Georgia Gubernatorial Election, Stacey redirected her energies into helping increase the number of registered voters in Georgia and flipping Georgia to a "blue" state.  During her own race, even after a runoff election, she lost to Republican Governor, Brian Kemp. However, we had not heard the last of Stacey Abrams.  She remains active in politics. On February 5, 2019, she presented a response to the State of the Union Address by President Donald Trump. That marked the first time a person from Georgia, or an African American woman, had ever made such a response. Some rumors suggested that she might become the running mate for 2020 Democratic presidential candidate Joe Biden.  While she was not selected, she remained undeterred.  Abrams served as an outspoken supporter of the Biden team. Her campaigning around Georgia helped to turn the traditionally Republican state into a battleground state in which either candidate could win. Ultimately, her work paid off, when Georgia eventually went to Biden. He became the first Democrat to win the presidential voting in Georgia in 28 years. Abrams did not question the fairness of this election, and proclaimed it a victory for a new, more Democratic Georgia.

It did not end there as Georgia still had a very difficult Senate runoff race.  Abrams continued to be a staunch advocate addressing voter suppression in Georgia.  The people of Georgia heard Stacey Abrams and acted through the  voice of their votes.

Stacey Abrams has authored two books, "Lead from the Outside:  How to build Your Future and Make Real Change" (2019) and "Our Time is Now: Power, Purpose, and the Fight for a Fair America." (2020) 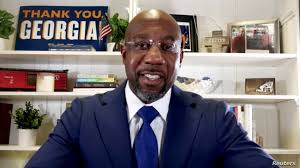 The Rev. Raphael Warnock won one of Georgia's two runoff elections on January 5, 2021 for the U.S. Senate with 51% of the popular vote.  Campaign mate, Jon Ossoff won the second seat.  Both men are the first Democrats elected to the the U.S. Senate from the state of Georgia since 2000.  Senator Warnock makes history as the first Black person to represent Georgia in the Senate.