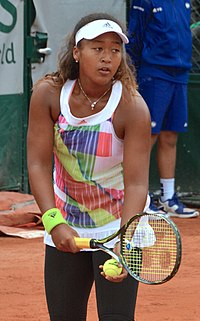 Naomi Osaka is a Japanese American who plays tennis representing Japan. She is widely known in the tennis world for her amazing serve speed, which clocked in at 124 miles per hour at the 2016 U.S. Open. In 2018 Osaka made headlines when she beat Serena Williams, arguably the best tennis player in the world at the time, at the U.S. Open. With the win, Osaka became the first Japanese tennis player to win a Grand Slam title. However, the win was shrouded in controversy due to an issue with one of the umpires. She went on to win the U.S. Open again in 2020 as well as the Australian Open in 2019.

Osaka began her professional tennis career in 2013. The following July, she qualified for the first time for the Women's Tennis Association (WTA) tour championship at Bank of the West Classic. In 2016 Osaka began making waves at some major events. She qualified for the Australian Open, her first Grand Slam tournament, and made it to the third round.

It was during this event that other players began taking notice of the talented young star. According to USA Today, Serena Williams told reporters at the Australian Open, "She's really young and really aggressive. She's a really good, talented player. Very dangerous."