In a presentation, place your works cited list on your final slide.

Within the body of the presentation, use in-text citations when you take information from a source.

Images in a PowerPoint presentation are cited in the same way they would be in a paper:

Underneath the image, give it a figure number, using the abbreviation fig.: Fig. 1.

Include the URL, removing the https: www.flickr.com/photos/profzucker/16816048015 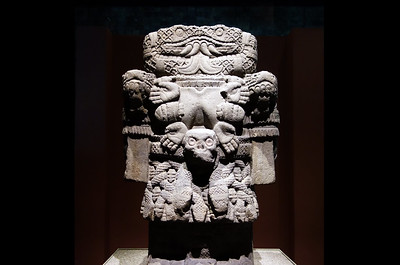 The following line is included because this image is being published on a publicly available web page.

The image does not need an entry on the Works Cited page because the relevant information has been included in the body of the paper.

(Note: this process is different if you are using the image as a source, e.g. if you were giving a presentation on an art work, e.g. Michelangelo's David and were going to analyze the art work.)

The sample PPT slide below shows what a Works Cited slide would like for some of the sources included on this guide.

Whenever you quote, paraphrase, or summarize from a source, use an in-text citation in parentheses.

When using an electronic source that does not have page numbers, use the author's last name alone, e.g. (Gabaldon)

If there is no author, use the title (shorten long titles), e.g. (The Aztecs).

When embedding a video on a slide, insert a line underneath the video and give it a figure number, e.g. Fig. 2.

Then give a brief caption including the name of the video and the date.

Then include the complete citation information on the Works Cited page.